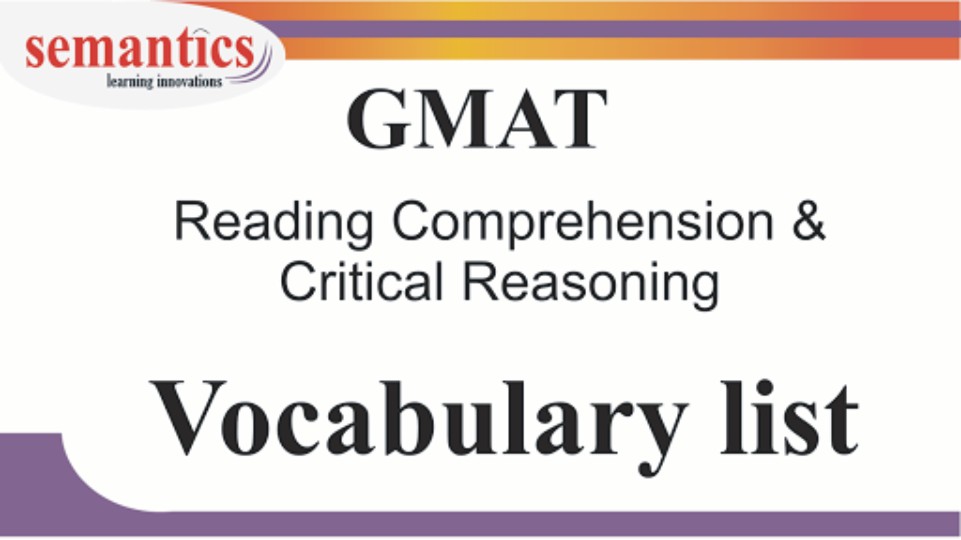 Take home, some GMAT jargon. Just gorge on them Yes, you heard it right…there are words typical to GMAT verbal ( critical reasoning and reading comprehension).. here’s a list, which comes handy in RC/CR.

1. Allusion : Indirect reference to a person, place or event to another.
2. Archaism : The use of words and expressions that have become obsolete in common speech.
3. Burlesque : An incognito imitation; it imitates the matter or form of a play in an amusing manner.
4. Connotation and denotation : The denotation of a word is its primary meaning; connotation is the range of accompanying meanings in which it suggests or implies.
5. Motif and theme : A motif is an element – an incident, device or formula – which recurs frequently.
6. Prosody : Systematic study of writing verse (poem); principles in the use of rhyme, stanza etc.
7. Anecdote : Simple narration of a single incident.
8. Pastoral elegy : Represents both the mourner and the one he mourns.
9. Figurative language : Deviates from what we apprehend as the standard significance or sequence of words, in order to achieve special meaning or effect.
10. Symbol : A word or set of words that signifies an object or event which itself signifies something else.
11. Historicism : A theory that history is determined by unchangeable laws and not by human agency or, it is a theory that all cultural phenomena are historically determined and that historians much study each period without imposing any personal or absolute value system.
12. Historical School : A school of economics maintaining that any economic theory must be based on historical studies of economic institutions.
13. Idealism : A philosophical system or theory that maintains that are real is of the nature of thought or that the object of external perception consists of ideas; the pursuit of high noble principles.
14. Existentialism : A philosophical movement that stresses the individual’s position as a self-determining agent responsible for his or her own choices.
15. Humanism : Assumes the dignity and central position of man in the universe and emphasizes on moral and practical rather than purely aesthetic values.
16. Aberrant/Aberration: deviating from the norm.
17. Aesthetic: dealing with, appreciative of, or responsive to art or the beautiful.
18. Anomaly: deviation from the normal order, form, or rule, abnormality.
19. Archaic outdated: associated with an earlier, perhaps more primitive, time.
20. Aver: to state as a fact; to confirm or support.
21. Bolster: to provide support or reinforcement.
22. Bombast / bombastic: self–evident or pompous writing or speech; pompous; grandiloquent.
23. Buttress: to reinforce or support.
24. Capricious: inclined to change one’s mind impulsively; erratic; unpredictable.
25. Censure: to criticize severely; to officially rebuke.

What next?
What are the 3 essential skills required to
ace the GMAT verbal ?
click here