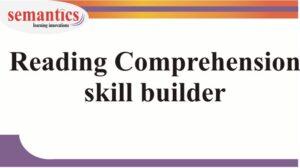 Can I  develop my  critical reading skills?

semantics presents to you – concept growth labs – for reading comprehension. Here we focus on each micro-skill.

In this module, you will be taught to

Here is one activity, which can hone your skill to infer information from a passage.

You need to read the passage. You, then, need to decide if the statements given are

3 strategies, which can help you answer the questions correctly.

Do another reading comprehension passage.

To know more about this short duration course..