Today, we will focus on causal arguments.

Causal arguments are arguments which comprise a cause and an effect.

An exit poll conducted by a popular television news channel reveals that the incumbent will lose the presidential election. The channel cites sharp decline in per capita income of the electorate leading to an anti-incumbency wave.

Reason:  Decline in per capita income leads to the anti-incumbency wave, which leads to the incumbent losing the election

Causal arguments attribute a cause to an effect.

The conclusion is based on causal logic. A certain cause is attributed to the effect;

When you see a critical reasoning question. First you need to break the argument into parts. Identify the

Do this logic drill. Type in your answers. Check the solutions after you click the submit button.

Do another logic drill 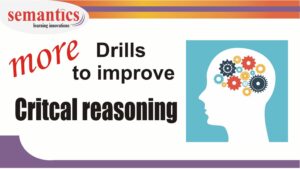